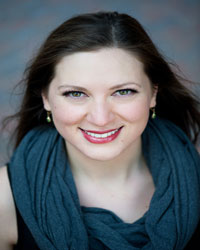 Eve has appeared on CBC’s North by Northwest, BBC 4’s The Archers, BBC 3’s In Tune, on the Prairie Home Companion (APHC Baltic Cruise 2014) with Garrison Keillor and she was a soloist in the BBC’s Last Night of the Proms (2016) singing Vaughan Williams’ Serenade to Music. She’s sung with the Victoria Symphony Orchestra, the Royal Academy of Music’s Song Circle and Kohn Foundation Bach Cantata Series, at venues including Wilton's Music Hall, Colston Hall, Trafalgar Square, the National Portrait Gallery (UK), St John's Smith Square, and she sang Canadian composer Tobin Stokes’ Canoe at Canada House in a private performance for Her Majesty, Queen Elizabeth II, His Royal Highness, Prince Philip, and Governor General David Johnston. Eve studied at the Royal Academy of Music (UK) on a Sainsbury Award and the Catherine Osborne Scholarship, going on to win the Academy’s prestigious Pavarotti Prize.

She is grateful for the support of the International Opera Foundation and the British Columbia Arts Council enabling her to study Mozart roles under the guidance of Dame Felicity Lott and Dr Jane Glover, and later in Strauss’s songs and roles with Dame Felicity and Anthony Legge. She is also grateful for support from the Josephine Baker Trust, the Canadian Centennial Scholarship Fund, and the Leon and Thea Koerner Foundation.

Rykie Avenant is a graduate of the University of Stellenbosch, South Africa. After obtaining a Licentiate in Piano sarahPerformance and a Bachelor of Music Education, she worked as repetiteur for the Cape Town and Pretoria opera companies before relocating to Canada in 1991.

Six years in the vibrant community of Powell River, enjoying all that the Academy of Music and the International Choral Kathaumixw Choral Festival had to offer, led to Vancouver Island, where she has lived for the past 16 years.

In the Cowichan Valley she is in demand as teacher, coach and performer, and currently focuses primarily on collaborative work with various voice studios and instrumental ensembles.