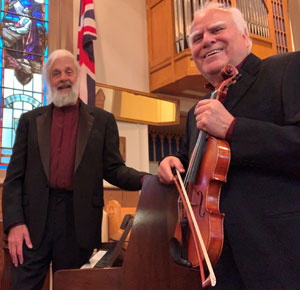 Tony and Pablo have performed a wide range of music together in diverse ensembles and venues, ranging from Messian's "Quartet for the End of Time" as part of the University of Victoria's Contemporary Music Ensemble; Tony's own setting of "Stabat Mater" at St. Michael's Church in Victoria; and most recently in the show "La Vie En Rose", a celebration of the music of Edith Piaf performed in theatres on Vancouver Island and in the Lower Mainland.

PABLO ROBERTO DIEMECKE is one of Canada’s finest violinists. He is a former concertmaster of the Victoria symphony. His live recording of the Carlos Chavez Violin Concerto with the National Symphony of Mexico was nominated for a Grammy in 2002 for the “Best Classical Album of the Year”.

Mr. Diemecke has developed an enormous repertoire of important works, featuring not only all of the major concerti and standard works for violin, but also a large number of Latin American concertos by composers such as Manuel Ponce, Carlos Chavez, LaValle, Rodrigo, Bustos and others. Two of these Latin American concertos were premiered by and dedicated to Pablo.

Mr. Diemecke produced a series of concerts featuring all five Mozart violins concertos in 2006. This year he is celebrating 9th anniversary of the “DieMahler Chamber Music Series” in Victoria. He has several recordings as soloist with different orchestras and is producing his own live recordings with his “DieMahler String Quartet”. He has recorded for CBC Radio Canada, Mexico, USA and Latin America.

TONY BOOKER has worked in the music business for over 50 years as keyboard player (piano, organ and accordion), vocalist, conductor, composer and arranger. Besides studying in England and Canada, he also studied in the former Soviet Union and the former Yugoslavia, where he developed his interest in Russian and Balkan music. Having received a Master Degree from Uvic, he remained at the School of Music on faculty as an accompanist for 30 years. His interest in Slavic music led to his becoming conductor of the Victoria Balalaika Orchestra in 1983. In 2000 he formed and directed a choir, 'Voces Intimae', which specialized in Russian Choral Music. He also sings and plays keyboard with Victoria's most versatile (though predominately Balkan) band 'Jamshed'.

Buy To This Event Directions