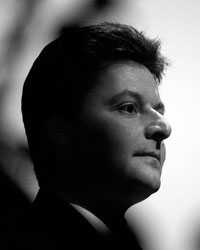 Walter Martella, conductor, Music Director of the Powell River Academy of Music and Artistic Director of the International Choral Kathaumixw, has long been an integral part of Powell River's musical community. He is an accomplished pianist, accordionist and trumpeter, starting lessons at age five, and soon joining the original Boys Choir conducted by Don James. Music remained his focus as he earned a Diploma in Jazz Trumpet from Malaspina College (VIU), a Bachelor of Music Degree from the University of Victoria and attended the Banff School of Fine Arts.

Conducting became a significant part of Martella's life and career when he returned to Powell River to study at PRAM under Don James. He has participated in the British Columbia Choral Federation's conducting program and has collaborated with world-renowned conductors. He has led noteworthy works like Holst's Rig Veda for choir and harp, the Messiah, Schubert's Mass in G, and Vivaldi's Gloria. He conducts the Academy Chamber Choir, Chor Musica Men's Choir and the Powell River Chorus as well as currently maintaining a full private teaching schedule.

Martella is a strong believer in the power of music as an important part of community. He has been an adjudicator for instrumental and choral festivals throughout British Columbia and is well known as an enthusiastic mentor, making room for his young students in his own public performances. He has recorded five jazz CDs, performed provincially with many well-known musicians in multiple genres and continues to be in demand all along the West Coast as a trumpet soloist and

Buy To This Event Directions